Well, we made it to Seattle. This is the first time in more than 17 years that my wife and I have driven I-5 from Vancouver, WA to Seattle. A lot has changed along the way. The trees are taller, the brush has grown up and you don't seem to get the views of the rivers and mountains like you use to. New businesses have opened and other businesses have closed. The drive was a kind of "Oh, that's new" or "remember when ......." You get the idea.

Of course no road trip, or any kind of trip is complete unless we stop at an outlet mall. 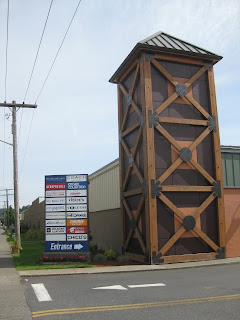 The outlet mall in Centralia/Chehalis has been in business for more years than we can remember. We saw it being built. It is a great draw for the area, and a very convenient off/on to I-5. So, after an hour of shopping and a Pecan/Carmel Latte for me, we were back on the road. For some reason the trip did not seem to take as long as it did in the "old" days. Maybe because in Texas it is five hours to get anywhere, and this drive to Seattle was a little more than 3.5.  It is hard to describe to folks in Texas what it is like to drive down a tree lined or almost tree walled Interstate, or stop at a Rest Area that has trees so tall that you can hardly see the sky. 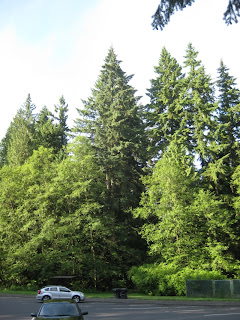 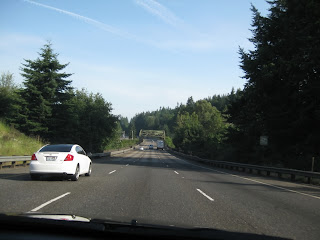 Of course everything is green, but it comes with a price - it is most often wet as it was for a couple days on our trip. But as always there were some things that I was able to capture in my "through the windshield" photos. Might have been a few more if I kept the camera ready instead of putting it away after each shot, then hurrying to get it back out for the next photo.

We arrived in Seattle on Thursday and stayed two nights with Deb's brother and his wife. We had a great time as we always do with them. Friday found us going into downtown Seattle. We had not been to the Hard Rock Cafe in Seattle, so a stop there for a souvenir was necessary. We also went to the Public Market on the Pike Street Pier. 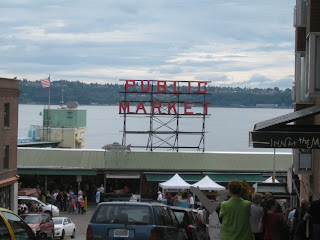 This is another place that we had gone to for years, and it is famous for the Fish Throwing at a couple of the Seafood Stores in the Market. The place was crowded and no fish were being thrown, as nobody was buying any fish. And some nice fresh fish they have. 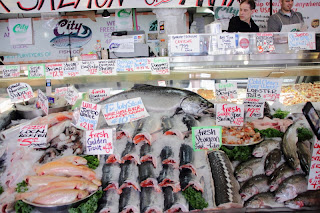 Since it was so crowded and there was no action (means no pictures) we took a detour to another place on the Pier that Deb and I had never seen, the "Gum Wall." 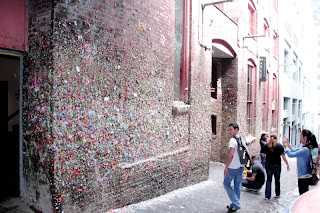 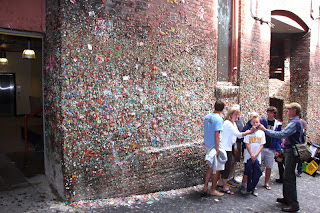 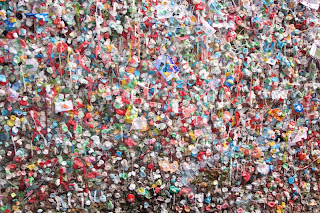 This has to be one of the most disgusting but fascinating sites to see. A large area of brick wall covered with ABC (Already Been Chewed) Gum of every color you can imagine. It has become quite a tourist attraction (and we think Austin is weird). After taking several photos and admiring the "work of art" we continued back into the Public Market.

You can get almost anything you want here, Fresh Flowers, Fresh Fish, Fresh Produce, Processed foods from local vendors, candles, jewelery, figurines made from Mt. St. Helens Ash and just about anything else you can think of. 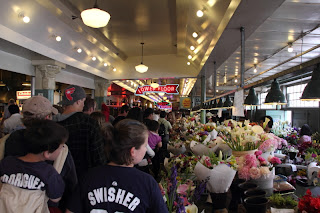 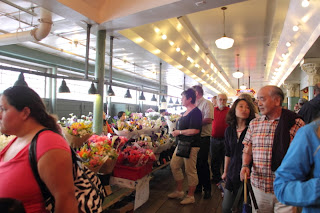 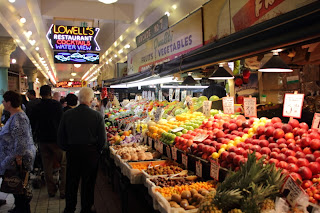 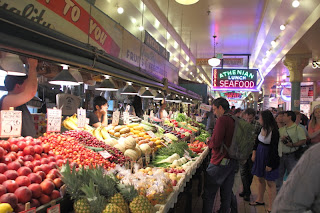 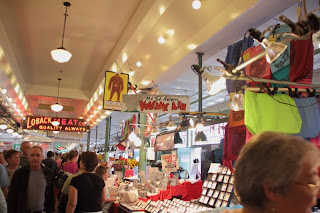 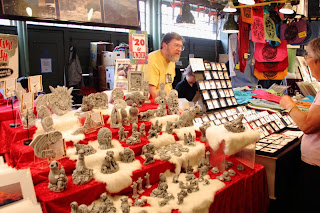 We made our way through the mass of people, with Deb and her Sister-in-Law stopping to make a few purchases along the way. We came out right across the street from the original Starbucks Cafe.

From the outside it sure does not look like the newer one just up the street. 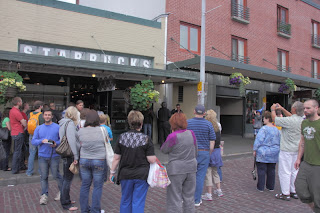 Along with the people there are a large number street performers. This particular group was performing outside the Starbucks and selling their CD's. 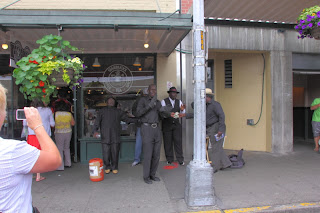 It took awhile to get this post done - Will get pictures from the rest of our trip up soon. 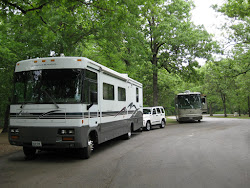